Boris is the fourth hero that you will unlock at stage 65. He has the most HP and dodge chance of the early heroes. 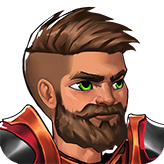 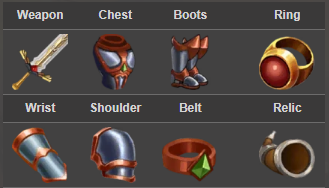 Boris was born to be a warrior. As a small-town child in the Riverlands, his incredible size separated him from the other boys. His body was so well-formed, so similar to the great hero statues from the Age of Adventure, that some joked: "His father must be a God". Year after year, he would travel with his family to watch the military parades, where he could admire his personal heroes, the Riverland Knights. He dreamed of wearing the Royal Guard's shining armor, worn only by the greatest of the Knights in service of the King, and as soon as he became a man, he did. In training, his favorite tool of combat quickly became the shield, a strange choice to many. Most young warriors preferred the sword, but in his arms, a shield became a fearsome weapon. With his unnatural strength, it became a barrier none could pass - his line never broke and his counterattacks always hit. After his knighting, Boris won honor after honor for excellence and bravery on the battlefield, and every great general of the human realm would request him as a personal guard in every dangerous expedition. As the years passed, the King took notice of his heroic deeds and awarded him the highest title known in the Riverlands: Defender of the Realm.

Boris became a part of history for his strength and loyalty to the forces of the Light in the Second Human-Undead War, during the Undead Siege of Irongard. The Undead, believing Humans to be emotional and weak, sought to break their morale. It is believed their plan was to spread panic by murdering a person of great importance, a symbol of human unity. Their plan was set when an elite squad of Undead Flayers discovered a maze of tunnels leading from the sewers to the inner court of Riverland Castle - a path to the king's family.

On the fifth day of the Siege, the Flayers broke into the court, quietly advancing to the Royal Chambers. Any resistance was futile against their savage slaughter, and their path was littered with skinless bodies. From his guard post, Boris heard a scream that was quickly silenced. Before the Guard Captain could even understand what was happening, Boris picked up his shield and ran to the Royal Family's chamber. There, he found the Undead at the Royal Family's door. With no hesitation, he rushed to their defense. It is said that his shield charge crushed every rotten bone of the first Flayer that was unlucky enough to stand in his way. Drawing his sword, he fought a one-man battle against them - the Undead had surrounded him, but every strike met his unbreaking defense. One by one, they fell to his frenzy, only the flash of his blade visible through the wall of his shield and armor. The King, hearing of the secret attack, ordered every member of the Royal Guard to rush to Boris' aid. By the time they reached him, they saw Boris holding the Flayer Captain by the throat, high above the ground. They could only look in terror and amazement as he dropped the Undead's body to the ground. Swinging his shield like it was made of air, he crushed the invaders body into a pulp of blood and bone-dust. A member of the court swears that Boris, picking up the Captain's skull and tying it to his shield whispered: "Now your friends will know, to cross my shield is to cross into the afterlife".