Talia is the first hero you will unlock at Stage 3. She has the highest base damage of all the heroes but at the cost of attack speed. She is the slowest. 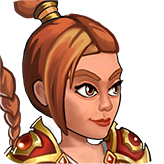 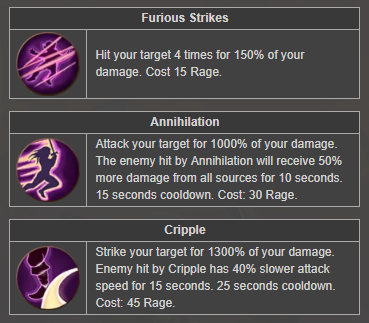 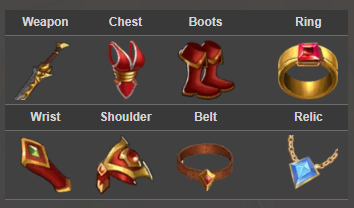 Not long ago a horde of Death Knights, ancient Knights who had fallen to the Darkness, terrorized the south-eastern borders of the Riverlands. They raided villages without mercy, killed unarmed farmers and burned anything they could. They never pillaged or stole - they only cared for chaos and disorder, to please their God, Yamanoth, Lord of Pandemonium. Many villages collected their valuables, food and animals in a desperate offering to please the Death Knights, only to be repaid in death. Many great champions of Irongard tried to free the land of this constant threat, but all were slain or ran away in defeat. Even more villagers fled to the south, leaving everything behind.

As the King was trying to find a solution, he called for a team of brave adventurers, anyone with quick thinking and unusual fighting styles. The team was to have a special approach, if they could not defeat the Death Knights in traditional combat, they would outsmart them. Talia was part of that team. Her father, a wandering Knight of Light that roamed the countryside helping villages in need, had trained her in the knightly art of combat since she could walk. As she grew older, he brought her on his missions, teaching her that to slay monsters, she would have to think like them.

Talia knew her skills would be tested when she heard the call to adventure. For weeks her team followed the trail of blood and destruction left by the Death Knights, until they learned of their location, a camp east of Calamindor. The adventurers fought in every way they could think of - fog from steam, explosive powder traps, and even a stealthy assassination raid in the middle of the night. In that raid, Talia saw with her own eyes her team leader torn to pieces by swords of Yamanoth's worshippers. In her anger, she lost control. She dropped her shield and began a rampage through the Death Knights' camp, burning their tents and killing their steeds. Blinded by anger and hungry for revenge, she forgot the value of her life and consequence - she only wanted the destruction of evil. Unknown to her, she fought in the only way that could match the Death Knights - unstoppable, unthinking destruction. Stunned by her fearlessness and afraid of a human that could match their thirst for devastation, they attempted to fight her in open battle. Trained in the art of the wandering Knights of Light and lost in her frenzy, none could fell her. Those left in the surrounding towns could hear Talia's roaring battle cries in the night, followed only by the screams of dying Death Knights.

Overcome by fear, the Death Knight captain ran for his life, hoping to lose the maddened Talia. The chase led through Silverwood Forest until, days later, they met in a clearing. The exhausted Death Knight Captain, knowing he could not escape, turned to fight her. Although Talia's body was weak, the thirst for justice at any cost kept her standing. With nothing to lose and everything to gain, her mind was dominated by the need to punish the wicked. With the Death Knight turned to face her and her torch blazing, she ran as fast as she could around the clearing, blocking any retreat, throwing oil and fire to the surrounding trees. Her enemy could only see a foe that surpassed him in savagery, that would stop at nothing to reach her goal in the name of good. He knelt as she charged toward him and leapt in the air with both swords drawn, knowing his God would be angered. In his blackened heart he knew that he was a disappointment to Yamanoth, falling to the raw power of destructive justice. His armor shattered with a single blow, and he met his shameful death.

The next day, the guards at the gates Irongard saw a woman approach, dragging a line of flaming Death Knight helmets behind her. The trail of fire, they reported, was lost in the distance. Quickly proclaimed by the militia as the fiercest woman in the kingdom, the enemies of humanity would come to know her by another name: The Ravager.